Low code platforms are making the lives of the developers easier and how?

Can no-code/low-code (NCLC) platforms replace developers? Rather they may fall in love with it! NCLC platforms have the ability to eliminate the repetitive and boring aspects of development and in place extend the opportunity of working on the most creative and rewarding aspects of programming. This is where the developers may be able to add the utmost value while using the NCLC platforms of development. The developers fear may be replaced with a lot of excitement around NCLC tools. Let’s see how?

Low-code frameworks are tools at the disposal of the developers

Unlike the AI revolution that can at some point supersede humanity or so predicted, a low-code platform is only a tool in the hands of the developers. So how do we derive the value of a tool that we use? Simple, by using it responsibly. Who can use the tool? The Developers. If more and more software is built on the low-code platforms, the developers are likely to take the badge of being the ‘best low-coders’. We can hire non-developers to build low-code applications however with limited technical knowledge, their capabilities may not match up with the expectations, especially when we talk of complex applications.

The developers come with a solid understanding of the fundamentals of the computer infrastructure, the web, software systems and the like. This gives them the upper hand to be more efficient and fast and leap far ahead of non-technical low-coders and no-coders!

Unlike the myth that NCLC can replace every coding requirement, it’s a fact that NCLC may not be the right option for every kind of business need. For example, if we want access to nuanced native APIs, low-code alone may not be able to fulfil it.

The developers are tolerant individuals and they have the ability to shine through every challenge. They are also able to trust plenty of tinted windows and move forth the black boxes! Adding one more to the list may not be as painful as it seems! And especially something old and relevant as low-code may not be a problem at all. Yes, low-code systems of application development have been around for quite some time. And alas they are getting noticed!

The popularity of low code tools.

The market for low-code tools is fast developing. As per the estimates put forth by Garter, by the year 2024, 65% of most of the application development will have some kind of low-code deployment.

What is driving the popularity NCLC platforms?

NCLC tools comes with pre-built modules.
With a repository of pre-built modules, the low code platform can assist the developers to build applications quickly and easily. These modules remain open to be reconfigured as per the enterprise operational demands. Enterprise low code platforms also come with the option to let the organisations create their very own custom modules and workflows. These can be reusable company assets.

NCLC can run on the premises or on the cloud
A host of low code platforms run as SaaS-based solutions in the cloud network. These solutions can be very easily set up and require minimal maintenance.  Many organisations may also prefer an on-premise option. This can enable them to deploy the apps built on their own public cloud networks or on their LAN behind the corporate firewall. There could be a number of technical, privacy or security-related issues behind the enterprise’s decision to run the platform on their own premises.

NCLC can elapse the development time
Low code can result in faster development time as there is less coding needed. Developers in fact can be way more productive while working on the low code tools. They can spend a lot of their time being creative and innovative.  They can spend their time gathering the requirements of the project, networking with the stakeholders, understanding the end-user requirements and so forth. Such a product that is developed collaboratively is more likely to be accepted and deployed.

Low code platforms are no doubt very powerful and they are slated to gather more strength by the day. However, we know that the low code platforms are tools for the deployment of the developers. They are designed to support developers with more power and not to replace them in any way. The low code is so designed that it can eliminate repetitive functions and processes. Processes that remain unique to the particular use case are likely to require unique written coding. Low code may get you there by 99% however the critical 1% is significant nevertheless. This 1% has the power to distinguish our business from the rest of others.

Low code experience can foster career progression for developers
Many developers appreciate the fact that career progression is more directly related to solving business problems rather than solely relying on the code and the latest framework. Low code has the ability to markedly reduce the time spent on mundane and repetitive coding which means the developers have more time in hand to understand and solve the business problems. They can also come up with quick solutions in the process.

Low code can create a more collaborative work culture because here the developers and the end-users are able to work closely, each dependent on the other. The developers can know deeper business insights and in the process learn many soft skills that might help them as they advance higher in the hierarchy and into senior roles.

How are developers able to maximise the use of low code tools?

Democratising Development
NCLC platforms come with more flexibility. They can provide more bandwidth to the developer assigned to a particular project. It may be possible for the front end developers to become full-stack developers and vice versa. We have more flexibility on the talent pool that is built around the NCLC community. The chances of career progression also increase.

The ability of Low code platform to improve the job satisfaction level.

With the NCLC platforms, it may be likely to stimulate the delivery of feel-good aspects that solve the problems paradigm. With the ability to deliver rapidly and creatively, it may mean that the developers are likely to be applauded and appreciated by the business key holders. We understand that people with different personality types are likely to see it in a different light. However, don’t you believe that delivering results quickly is more likely to make you a hero in the eyes of your stakeholder? This in turn may support you in your career ascent?

So NCLC is far away from being developers’ career-killer. We leave this open-ended for you to debate upon!

ToolJet : There are many companies out there offering low-code development modules. ToolJet is one of the leading open-source low-code platforms . We make the development & integration of workflows, APIs and applications quicker and faster. We are witnessing the world moving towards low-code along with our developers and they are not complaining!

Ending Note: The low code industry is moving in the upward direction and it is not likely to slow down any soon. This doesn’t at all mean that developers need to fear low-code. The LCAD platforms are built to make their lives easier and for them to focus on their innovative genius. They are spared from rewriting and reworking the repetitive code. The developers are surely figuring out ways to use low-code platforms to their advantage. Isn’t it a good opportunity for them to maximise their development time to build creative products and applications? 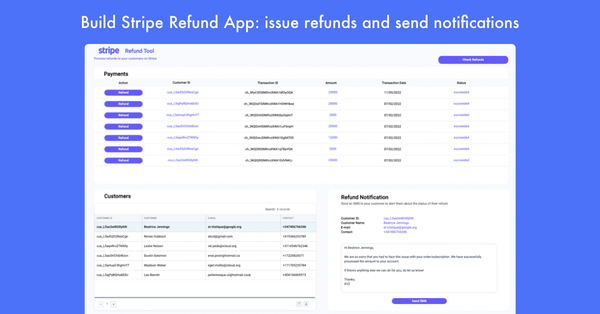 In this tutorial, We will build a Stripe Refund Application for looking up all customers' data, all payments, issuing refunds to customers and sending them confirmation email/sms notifications.The Stripe refund application will allow you to go through all the customers, payments, and issue and check refunds within a

We are excited to announce that our GitHub repository crossed 10,000 stargazers. It has been an amazing journey building ToolJet alongside our energetic and involved community. In this article, we will discuss about our learnings from this fast-paced journey of building an open-source product that the community loves. For 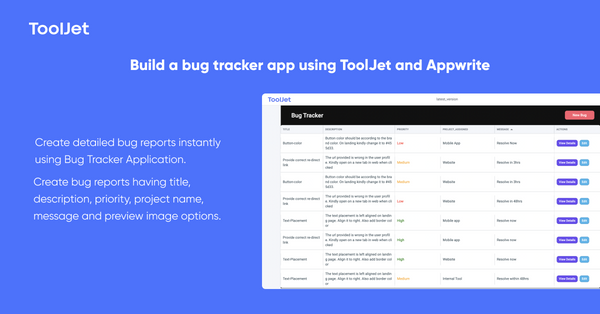 This article will see a complete guide to building a Bug-Tracker app that allows you to create and manage your bugs with title, description, project name, priority, and tag with inbuilt messages to notify the user. You can preview the hosted app here. We are going to build this app